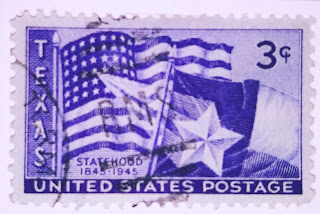 The 1945 Texas Statehood stamp is one of the most favorite stamps that I have. It's an absolutely beautiful stamp showing the United States flag and the Texas state flag. The United States flag is projecting it's 28th star to Texas' single star on its flag. I have always been extremely fascinated with Texas history and am thrilled that I have a chance to delve further into it and share it with you. Living in Oklahoma, which neighbors Texas to the north, there has always been a rivalry-like feeling between the two states. From the Red River Showdown (rivalry game between The University of Oklahoma and The University of Texas football teams) that was actually spawned by a real conflict between the two states called the Red River Bridge War, to multiple lawsuits over border disputes due to the finding of oil along the Red River, the rivalry continues to this day.

The Texas statehood stamp was issued on December 29, 1945, in Austin, Texas.  Over 170 million were printed by the Bureau of Engraving and Printing by the rotary press method.  Its perforations are 11×10 1/2 and it is dark blue in color. The stamp pictures both the U.S. flag and Texas flag with a beam of light projection on the lone star of Texas (nicknamed the Lone Star State) from the 28th star of the U.S. flag. Texas was the 28th state to join the United States.

There is a slogan that "Everything is bigger in Texas". I'm not sure if that slogan is entirely accurate, but the state its self is huge. It is the second-largest state in Area at over 268 square miles, second only to Alaska. It also has the second-largest population behind California coming in at over 28 million people.

Before the European appearance in 1519, the land that would become Texas was inhabited by Native Americans, who had lived there for over 10,000 years.  Many tribes have called what is now Texas home. In fact, the name Texas is derived from the word táyshaʼ which means "friends" or "allies" in the Caddoan language of the Hasinai which occupied territory in eastern Texas and are now enrolled in the Caddo Nation of Oklahoma.

The first recorded European discovery of Texas was by Spanish Conquistadors in 1519 by explorers, sent by the governor of Jamaica, looking for a route between the Gulf of Mexico to Asia. After that, the area was basically ignored for another 160 years until a colony was founded there due to an accident.  Sieur de La Salle led an expedition for France to find and establish a colony near the Mississippi River and due to a series of mistakes and miscalculations landed in Texas.  Due to many hardships and diseases, the people started to dwindle in numbers. La Salle was killed by his own people in east Texas when out looking for the Mississippi River.  When the Spanish heard of the colony they sent 10 expeditions to find it. Finally, the last found a French deserter of the colony who led them to its location.  Upon arriving they discovered the colony in ruins.  The Karankawa tribe was upset that the French colonists had taken some canoes without payment and attacked, leaving only 4 children alive.

After all the expeditions sent to find the French colony, Spain had learned quite a lot about Texas and started building missions to convert the native people to Christianity.  However, the natives of the area weren't easily converted and had no regard to the religious leaders.  Attacking and stealing the livestock of the mission was common and eventually caused the majority of the priests to leave.  Eventually, the Caddo threatened those that remained because they were angry about the spreading of smallpox, and the rest of the Spanish left.  And once again Spain gave up on Texas, this time for 20 years until they ordered the reoccupation of Texas after concerns of the French planning on helping to reestablish missions causing Spain to establish new missions in East Texas to act as a cushion between the French territories and New Spain.

In 1762 France gave Texas and everything west of the Mississippi River to Spain in the treaty that ended the Seven Years’ War. However, in 1799 Spain gave it back for a promise of a throne in Italy. In 1803 Napoleon sold Louisiana to the United States for 15 million dollars and since there were constant discrepancies in the borders due to frequent changing of hands Texas was lost. The United States claimed the purchase included the western part of Florida and all of Texas since Thomas Jefferson claimed that Louisiana stretched as far as the Rocky Mountains and the southern border was the Rio Grand river. The dispute over the borders of Lousiana was finally agreed upon in 1819 when Spain and the United States signed the Adams-Onís. Spain gave Florida to the United States for all of Texas.

In 1821 Mexico declared independence from Spain after much conflict over the past 20 years. Much of the land that was Texas was absorbed into the newly formed country with Texas having the option to create it’s own state when it so chose to, and that’s exactly what happened.

By 1835 disputes between the settlers and the new government let to the Texas revolution. Mexico had gone from a federalist state to a centralist one and the settlers of Texas wanted more freedoms than the Mexican government allowed. From the banning of slavery by the Mexican government to the banning of American citizens immigrating to Texas, Texans wanted control of the decisions made for Texas. The Texian Army defeated the Mexican troops and the Republic of Texas was created on March 2, 1836, when Texans signed the Texas Declaration of Independence. After this, Antonio Lopez de Santa Anna (the president of Mexico) led 6000 troops into Texas. Santa Anna split his men and went to the Alamo where after a 13-day siege killed over 200 Texans and one of his generals went up the coast of Texas leading to 300 Texans dying at Goliad’s Massacre. After these crushing blows to the settlers of Texas, most fled to Eastern Texas and many joined the Texas army. They eventually attacked Santa Anna’s troops near what is now the city of Houston (named after General Sam Houston of the Texas army) and captured Santa Anna and made him sign the Treaties of Valasco, which ended the war.

The Mexican-American war lasted for about two years with Mexico giving up its northern territories, including California and New Mexico and the United States paying over 15 million dollars to Mexico for damages. After the war settlers immigrated to Texas in droves from all over the United States and the world with Germans being the largest group to move there.

In February of 1861 Texas seceded from the United States and joined the The Confederate States of America and then in April of that same year the American Civil War started. Many people from Texas fought in the war but there were no battles in Texas until what some people claim was the last battle of the war at the Battle of Palmito Ranch. The war ended in 1865 and it took almost 5 years before Texas was restored to the United States by Congress.

The road to statehood for Texas was rough and bloody. To this day Texas and it’s citizens are instrumental in the success of the United States. The history of the United States and possibly the world would have taken a totally different path if any of the countries that controlled Texas would have taken different steps to control it’s holding there. I have really enjoyed reading about Texas and sharing it with you. I hope the next stamp I decide to research is as enjoyable.

Email ThisBlogThis!Share to TwitterShare to FacebookShare to Pinterest
Labels: 1945 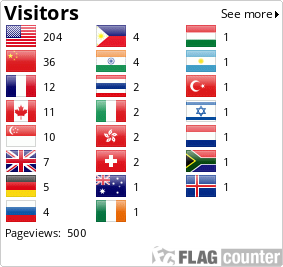